A teenager was admitted in critical condition with trunk internal injuries following a single vehicle rollover accident 1 mile west of Chickasha near the intersection of West Country Club Road and County Street 2800.
The accident occured on Saturday, November 5 at approximately 1:45 pm according to the Oklahoma Highway Patrol.
A 2018 Toyota Corolla driven by a 17 year old juvenile male whose name was withheld, a resident of Chickasha was eastbound on West Country Club Road at a high rate of speed. The driver lost control of the vehicle and departed the roadway to the right, overturning multiple times and coming to rest in a field after striking a fence. His passenger was pinned for an unknown period of time and was extricated by Chickasha Fire Department and Chickasha EMS.
The driver was treated and released. His passenger was transported by Chickasha EMS to Grady Memorial Hospital and transferred by Air Evac to OU Medical Center.
The report said the cause of the accident was excessive speed. The incident was investigated by Trooper Steven Mitchell #673 of the Grady County Detachment of Troop G and assisted by Chickasha Fire and EMS, and Chickasha Police Department. 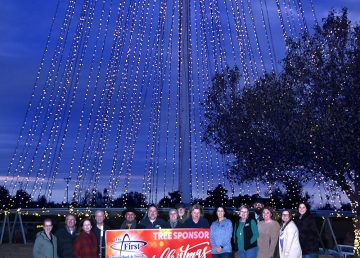 On Friday night, the Festival of Light welcomed its first-ever Big Tree Sponsor as bankersfrom The First Bank & Trust Co. lit up the 16-story beacon of Christmas cheer. Seen formiles around, the tree has become a key symbol of Chickasha’s national reputation f... END_OF_DOCUMENT_TOKEN_TO_BE_REPLACED