OKLAHOMA CITY – Attorney General John O’Connor praised the U.S. Supreme Court for its long-awaited decision today overturning Roe v. Wade. That decision, Dobbs v. Whole Woman’s Health Organization, makes clear that there has never been a fundamental right in the U.S. Constitution to kill unborn children and that Roe was egregiously wrong when it was decided.  Now the voices of the people, speaking for themselves and for our unborn children, can once again be heard.

On July 29, 2021, Attorney General O’Connor filed an amicus brief in Dobbs, urging the Court to overturn Roe and Planned Parenthood v. Casey, which incorrectly upheld Roe in 1992. He joined with two dozen attorneys general on that brief, which pointed out that Roe was completely untethered from the Constitution and had negatively distorted numerous other areas of law as well. As a result, the attorneys general observed, the supposed “right” to end the life of an unborn child had become in some ways more protected than rights written in the Constitution, such as the freedom of speech or freedom of religion.

“I am beyond grateful for having been given an opportunity to play a role in ensuring that Roe is tossed into the trash bin of history alongside such cases such as Dred Scott and Plessy v. Ferguson,” O’Connor said. “Countless other pro-lifers have contributed greatly to this movement, as well, over the past 50 years. Enormous praise is due to them and their tireless work on behalf of unborn children, justice, and the United States Constitution.”

Dobbs centered on a Mississippi state law that bans most abortions after 15 weeks of pregnancy. Relying on the U.S. Supreme Court’s abortion jurisprudence, a lower federal court blocked the law from taking effect. The Supreme Court agreed to hear the case last year, however, and it finally issued its decision today upholding Mississippi’s law and overruling Roe and Casey in the process.

“The Constitution makes no reference to abortion, and no such right is implicitly protected by any constitutional provision,” the Court wrote. “It is time to heed the Constitution and return the issue of abortion to the people’s elected representatives.”

As was his statutory duty under Oklahoma law, the Attorney General today certified that Roe and Casey have been overruled such that Oklahoma may prohibit abortion on demand. In that letter, he also indicated that he would begin efforts immediately to enforce Oklahoma’s abortion prohibitions, especially the one found in Section 861 of Title 21 of the Oklahoma Statutes. 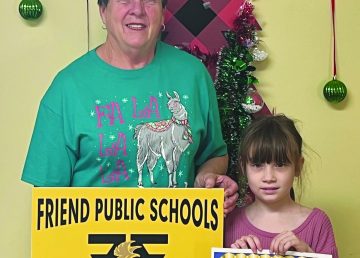 Friend School has began a new Student of the Month program. Emery Turner who is a kindergarten student at Friend was selected this month for the K-3 grade group. Pictured with Emery is teacher, Janet Howard.  The 4-8 grade student of the month is Katelyn Brow... END_OF_DOCUMENT_TOKEN_TO_BE_REPLACED

Ross Seed True Value on Choctaw Avenue started an event 22 years ago that has become a tradition. Ross Seed True Value was seeking a way to kick off the holiday season with some kind of event, when Paul Horton, the manager at Ross’s decided to have a holiday ... END_OF_DOCUMENT_TOKEN_TO_BE_REPLACED