Defendants Directed Drug Trafficking Network Through Contraband Cell Phones From State Prisons and are Collectively Sentenced to 1,350 Years in Federal Prison Plus One Life Sentence

OKLAHOMA CITY – A five-year, state-wide investigation into the drug trafficking and other criminal activity of the Irish Mob Gang (IMG), an Oklahoma-based prison gang, has resulted in 125 defendants being convicted across multiple federal cases, including more than a dozen high-ranking, incarcerated members of the Irish Mob.

Over the course of this multi-phased investigation, federal, state, and local law enforcement used various investigative tools and techniques, including a dozen court-approved wire taps on phones used by the IMG’s network.  More than half of the wire taps were on contraband cell phones smuggled into state prisons that defendants used to direct trafficking operation outside prison walls.  In addition to convicting 125 IMG members and associates, law enforcement seized more than 525 pounds of methamphetamine and heroin, 212 firearms, and almost $600,000 in drug proceeds and real property associated with the IMG’s criminal activity.

Crimes for which the 125 IMG members and associates were convicted include drug trafficking, drug conspiracy, money laundering, witness retaliation, witness tampering, maintaining drug premises, illegal firearms possession, and possession of drugs and drug paraphernalia, among others.

Among the defendants are the following:
· David Postelle, 39, the head of the IMG, ran the drug trafficking operation from his maximum-security state prison cell by connecting fellow IMG members to sources of supply for drugs through contraband cellphones.  A federal judge held him responsible for either distributing or assisting in the distribution of over 270 kilograms of methamphetamine.  Postelle was sentenced to life in federal prison for his part in orchestrating this large-scale drug trafficking ring from behind prison walls.

· Chad Hudson, 41, the leader of the IMG before Postelle took over, was held responsible for dealing more than 45 kilograms of methamphetamine from inside his maximum security prison cell.  Hudson was sentenced to serve 348 months in federal prison.

· Zachary Clark, 31, an IMG member and state inmate, was found responsible for distributing approximately 100 kilograms of methamphetamine from state custody.  While in federal custody, Clark also engaged in repeated attempts to intimidate witnesses.  Clark was sentenced to serve 480 months in federal prison.

· Aaron Keith, 40, an IMG member and state inmate, was convicted for conspiracy to distribute methamphetamine from his state prison cell.  He was involved with multiple acts of violence, including participating in the stabbing of another IMG member believed to be cooperating with authorities against the gang.  Keith was sentenced to serve 480 months in federal prison.

· Rogelio Velasquez, 44, one of the sources of drug supply for the IMG, was convicted of conspiracy to traffic drugs and lauder drug proceeds.  When he was arrested in Kansas, he had over 100 firearms stashed in several locations, and wiretap interceptions during the investigation revealed that Velasquez was trafficking firearms to Mexico.  The investigation also implicated Velasquez in an attempted murder in Kansas.  Velasquez was sentenced to serve 310 months in federal prison.

·  Niko Davis, 30, an IMG associate, was arrested when intercepted communications indicated that he had been dispatched by Richard Coker, 39, an IMG member and state inmate, to “pistol whip” a third party in exchange for some heroin.  Coker had likewise told Davis regarding a witness, “I need her head blown off.”  For their respective parts in the overall IMG drug conspiracy, Davis was sentenced to 84 months in federal prison, while Coker was sentenced to 360 months in federal prison.

· Jade Nichols, 26, was initially convicted in March 2020 of being a felon unlawfully in possession of a firearm and ammunition.  Nichols was convicted again in June 2021 of two counts of witness tampering—one of the assaults coming at the direction of another incarcerated leader of the IMG.  Finally, Nichols was convicted for a third time in December 2021 along with Chad Clark, 36, of witness retaliation after assaulting a cooperating defendant.  Nichols and Clark are awaiting sentencing.

Other defendants include high-ranking members of the IMG, a Mexican-based source of drug supply to the IMG, drug couriers, money launderers, and even two state prison guards.

Early in this investigation, death threats were made against two prosecutors by IMG associates.  Additional security measures were required to ensure that the prosecutions were undeterred, and the safety of the prosecutors was maintained throughout this investigation.  Likewise, during the investigation, and thanks to law enforcement’s use of wiretaps, dozens of acts of potential violence were prevented, ranging from potential shootings to kidnappings and assaults.

“This wide-spread drug trafficking operation was primarily directed and controlled by incarcerated gang members using contraband cell phones from their state prison cells,” said United States Attorney Robert J. Troester.  “Now, 125 gang members and associates have been held accountable, more than 525 pounds of deadly drugs have been taken off the streets, and 212 firearms have been taken out of the hands of criminals.  I commend the outstanding effort and long-term coordinated teamwork of law enforcement partners led by the FBI, Oklahoma City Police Department, and IRS-Criminal Investigation, who worked closely with the dedicated and outstanding prosecutors in my office.”

“This was an outstanding example of federal, state, and local agencies working together to positively impact the state of Oklahoma by disrupting and dismantling this large-scale violent gang involved in drug trafficking,” said Ed Gray, Special Agent in Charge of the FBI Oklahoma City Division. “Make no mistake, the sentences handed down should serve as a warning to those thinking of filling the void created by the successful prosecution and convictions in this case – we aren’t finished. Our agents are dedicated and persistent.  We will continue our efforts to free the community of deadly drugs, drug dealers and the violent crime it perpetuates across our cities while fulfilling our mission to Protect the American People.”

“The Oklahoma City Police Department appreciates the partnerships we have with our state and federal agencies,” said OCPD Chief of Police Wade Gourley.  “Public safety in Oklahoma City takes a considerable team effort.  This investigation is a perfect example of how we work together to combat major crimes, which have a huge impact on the safety of our residents.  Methamphetamine use and its associated criminal activity have a detrimental effect on our city and this operation will certainly make our community safer.  Thank you to everyone involved for your continued support and dedication to the safety of Oklahoma City residents.”

“These prosecutions are an important victory for the American public.  The laundering of illegal drug profits is as important and essential to drug traffickers as the very distribution of their illegal drugs,” said Christopher Altemus, IRS Criminal Investigation, Special Agent in Charge, Dallas Field Office.  “Without these ill-gotten gains, the traffickers cannot finance their organizations. The role of IRS-CI in narcotics investigations is to follow the money to financially disrupt and dismantle drug trafficking and money laundering organizations.  We are proud to provide our financial expertise as we work alongside our law enforcement partners to bring criminals to justice.”

Reference is made to public filings for more information. 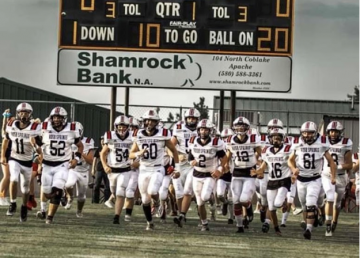 by Conner Black, CTCN Sports Correspondant Friday night Rush Springs took on Mangum at home. It has been a slow start to the season with the Redskins being 0-3 after losing by 1(35-34) on the 9th. But not all is bad because on paper these stats look great.  Qu... END_OF_DOCUMENT_TOKEN_TO_BE_REPLACED

Accident causes damage to utilities and sends one to the hospital.