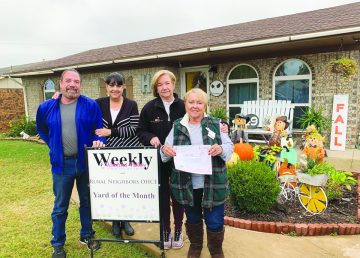 Yard of the Month

The Yard of the Month sponsored by Rural Neighbors OHCE Club, through their Resource Management Committee has made their selections for the program that brings recognition to citizens and business owners that take pride in the outward appearance of their prop... END_OF_DOCUMENT_TOKEN_TO_BE_REPLACED

Washita Valley Publishing, The Chisholm Trail Community News, The Washita Valley Weekly, and ChickashaToday.com is excited to announce that Elizabeth Skahill has joined our Team as a Marketing Specialist.Elizabeth is a well-known Southwest Oklahoma Photo-Journ... END_OF_DOCUMENT_TOKEN_TO_BE_REPLACED

The Best Time to See Fall Foliage in Oklahoma is nearing