Murder charges to be filed against Marlow woman

Second degree murder charges have been levied against Karen Jean Pritchard, 49, of Marlow.
Also, Pritchard has been charged with animal cruelty for allegedly running a puppy mill where almost 200 animals were found in what was described as ‘deplorable conditions’ according to reports.
A report to the Stephens County Sheriff’s Office that a person may have been injured or killed was received on Friday and Sheriff’s Deputies responded to a welfare check at the property located north of Marlow. Once there, Deputies asked for a search warrant.
A search of the property discovered the body of Ashley Nicole Anderson, 31, in an outbuilding and according to news reports Sheriff McKinney said it appeared that the woman died from blunt force trauma, however an official determination is yet to be made.
Also, an apparent puppy mill was being run on the property and the animals were being housed there in questionable conditions. The Stephens County Humane Society was called to the scene and many of the animals were kept in small pens stacked on top of each other with no bedding, food or water. Many were reported with sickness, sores with matted hair and other conditions.
The dogs which included several breeds such as Yorkies, Chows and Golden Retrievers were taken to local animal clinics and boarding locations. Saturday, the Humane Society of Tulsa and Humane Emergency Animal Response Team picked up 165 animals which also included a cat and two sheep on the property.
Otherwise local citizens heeded the call for help and brought hay for windbreaks and bedding and other supplies to help protect the animals from the frigid temperatures of the season. 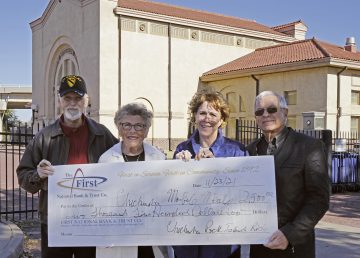 Mobile Meals of Chickasha Records were smashed for Chickasha’s fall charity fundraiser hosted by the Rock Island Ride.  More than 300 cyclists mounted the Oct. 2 competition, which generated more prize money than ever for charities in Chickasha.  Mobile Meals ... END_OF_DOCUMENT_TOKEN_TO_BE_REPLACED