…and so it begins!

On his first day in office, President Biden signed seventeen (17) Executive Orders.  Most overturned President Trump’s EOs.  With the stroke of a pen, Biden halted funding for the building of the southern border wall, shut down construction of the Keystone pipeline, reversed the travel ban on several Muslim countries associated with terrorism, rejoined the Paris climate treaty, and rejoined the World Health Organization.  He directed the Census Bureau to require ‘non-citizens’ be included in the Census and factored into the apportionment of congressional representatives.  He signed an EO that allows transgendered children to use whichever bathroom they feel comfortable with.  “All persons should receive equal treatment under the law, no matter their gender identity or sexual orientation,” Biden said.  Biden restored collective bargaining for federal workers and laid the foundation for a $15 federal minimum wage.  Economists agree a hike to the federal minimum wage would kill 3.7 million jobs in the U.S.   In his first week, Biden has signed over thirty EOs. Three observations.
First, Biden’s call for unity in his inaugural speech was disingenuous.  Virtually all of his Executive Orders overturned Trump administration policy.  That is not uncommon when presidents from opposite Parties follow one another, but Biden’s call for America to come together lacks authenticity.   His actions don’t mirror his rhetoric.  Elections have consequences and Biden proved that by signing EOs reversing many of Trump’s policies.  Calling for unity while you sow division is the height of condescension, arrogance, and haughtiness.    He shouldn’t be preaching unity.
Second, the use of Executive Orders should be curtailed.   Trump signed 217 in four years, Obama 276 in eight years, George W , 290 in eight years, Franklin Roosevelt 3,522 in 12 years.  The first fifteen presidents in our nation’s history issued 120 total, but starting with Lincoln, they became more common.  Congress can veto an EO with a 2/3 majority, but they seldom do.  The legislative branch is supposed to be the most powerful of the three branches, but presidents (in both Parties) are using EOs to circumvent the legislature and sovereignly make and enforce law.  It should be stopped and Congress should schedule votes on every EO issued by President Biden(or any president).
Third, Biden will reverse, rescind, overturn, and nullify everything Trump did the past four years.  With Democrats in control of both chambers of Congress, he will likely be successful.  America is in for a tough couple of years.  The mid-term elections of 2022 will likely result in a swing back to the right, but until then expect Biden and Harris to push for socialist policies that will hurt America business and trade.  The hope of America is not Donald Trump running in four years.  It is having Trump supporters stay hooked up and work to elect conservatives at the local level (school board, municipal, county).  They need to pay attention all the time, not just on election years.
When challenged by a reporter on his trashing of Trump’s response to the coronavirus, President Biden snapped, “Come on – give me a break man!”  Sorry, but the president doesn’t get a ‘break.’  Elected officials, at all levels, should be willing to defend themselves, their policy decisions and their votes.  When American voters force them to defend their actions, they will have recaptured their government. Steve Fair is Chairman of the 4th district of the Oklahoma Republican Party. He can be reached by email at okgop@aol.com. His blog is stevefair.blogspot.com. 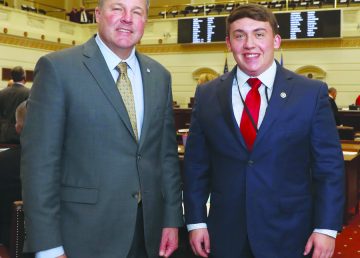 Starting a new career at 50

I hear from so many people who are nervous or scared to make a career change in their fifties, even if they’re miserable at their current job. I get it. There are a lot of fears and insecurities that can creep up when you’re thinking about making any big chang... END_OF_DOCUMENT_TOKEN_TO_BE_REPLACED

BIGGER THAN ONE PERSON!

From the Desk of Sen. Jessica Garvin