Dick Lowe, Republican Candidate for Oklahoma’s 56th House District, took time to meet and greet the public this past week. On Tuesday, October 20, John and Laurie Allen hosted the “Friends in Lowe Places” event at Perrefitte, in downtown Chickasha.
Lowe, and his wife Judy took time to answer questions and address concerns of all who attended.
Lowe, a graduate of Ninnekah High School and Amber, Ok resident has been active in Grady County his whole life. He is a former cattle rancher, former Ag Ed instructor and currently serves as the Coordinator for Business and Industry at Canadian Valley Technology Center.
Lowe is known for his conservative values; he is pro-life and a supporter of the Second Amendment. As quoted from his website, Dick likes to say that rural Oklahoma is “made up of common people with common sense who work uncommonly hard.” 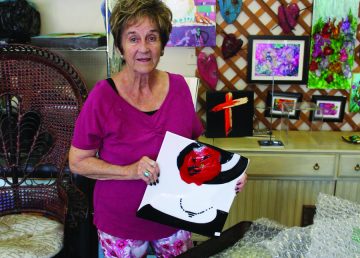 A new one of a kind art studio is opening in Marlow on June 10th. Located at 210 West Main in downtown Marlow, Jolene Forbes is opening ‘Jolenes Art Den’.. Jolene has had a successful gallery in the Paseo Art District in Oklahoma City for the past eight years... END_OF_DOCUMENT_TOKEN_TO_BE_REPLACED

Washita Valley Publishing, The Chisholm Trail Community News, The Washita Valley Weekly, and ChickashaToday.com is excited to announce that Elizabeth Skahill has joined our Team as a Marketing Specialist.Elizabeth is a well-known Southwest Oklahoma Photo-Journ... END_OF_DOCUMENT_TOKEN_TO_BE_REPLACED