An executive order, given by Oklahoma Governor J. Kevin Stitt, stated all American and Oklahoma Flags on state property were to be flown half-staff to honor Ricky Fulton, a Grady County Firefighter, as he was laid to rest on Wednesday, September 30th.
The United States flag flies at half-staff when the nation or a state is in mourning. This is done to mark the death of a government official, military member, or first responder; in honor of Memorial Day or other national day of remembrance; or following a national tragedy.
Fulton, an air tanker pilot, lost his life while helping battle the Schill Wildfire in Emmett, Idaho on September 22, when the aircraft he was piloting malfunctioned, leading to a crash. The fire, which burned over 30 acres of land was finally contained this past Tuesday.
Fulton was a professional pilot and active in the Oklahoma Aerial Applicators Association, Oklahoma Pilots Association and member of the AOPA and EAA.
Anyone wishing to honor the life of Ricky Fulton can make memorial donations to the Oklahoma Community Foundation of Oklahoma Pilots Association (OPA) Scholarships. Send them to:
In Honor of Ricky Fulton
PO Box 1146
Oklahoma City, OK 73101
So far this year, over five million acres, more than 7,000 structures and at least 40 lives have been taken by fires that continue to burn along the West Coast of the United States. The areas affected by fires are also enduring some of the worst air quality conditions in the world. The smoke from wildfires in California, Idaho, Oregon and Washington stretches clear across the United States to the east coast and is pushing into Mexico, Canada and parts of Europe. The smoke poses no real threat to those far away but has contributed to hazy skies and vivid sunsets.
Our thoughts and prayers are with all the brave men and women who continue to fight these fires. 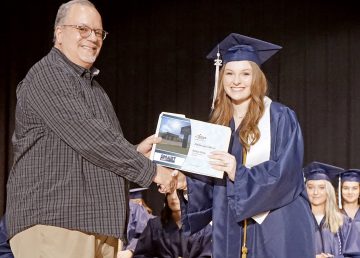 Receiving the SmartMoney Scholarship for leadership and academics, Ashlyn Price of Minco stepped forward this week to be honored by The First National Bank & Trust Co. in Minco.  She is a valedictorian and member of the National Honor Society. She is a cheer c... END_OF_DOCUMENT_TOKEN_TO_BE_REPLACED

First Class Stamp to go to 60¢