by Wayne Watts, publisher
The November 3 General Elections are just a month away. The deadline to register to vote or update voter information such as a change of address is Friday, October 9. There is a huge push on all sides to encourage voting in the upcoming elections.
All Oklahomans will have the opportunity to vote on U.S. President/Vice President, a U.S. Senator, and also a Oklahoma Corporation Commissioner.
In addition there are judges to vote to allow them to keep their positions or to dismiss them. They are not running against anyone or do they have challengers, simply yes or no to retain them. Since Oklahoma began the Judge Retention system, not one judge has ever been replaced by this proceedure.
Also, there are two State Questions to decide. Should either be approved they will change or be added to the State Constitution. State Question No. 805 if approved will prohibit the ability of prosecutors and judges to add additional time to felony sentences due to previous felony convictions. State Question 814 will alter the funding that TSET recieces from the Tobacco Settlement Trust Fund from

75% to 25% and change the amount the state legislature receives from 25% to 75% . The amount turned to the legislature must be used to get matching funds for Oklahoma’s Medicaid Fund recently approved by voters.
Oklahoman’s have a choice on their ballots to vote for all party candidates, either Republican, Democrat or Libertarian, or vote on individual candidates. Here are your statewide choices:
President/Vice President
• Republican: Donald J. Trump/Michael Pence
• Democrat: Joseph R. Biden/Kamala D. Harris
• Libertarian: Jo Jorgenson/Jeremy Spike Cohen
• Independent: Jade Simmons/Claudia J. Roze
• Independent: Kanye West/Michelle Tidball
• Independent: Brock Pierce/Karla Ballard
United States Oklahoma Senate:
• Republican Jim Inhofe
• Democrat Abby Broyles
• Libertarian Robert Murphry
• Independent Joan Farr
• Independent A.D. Nesbit
Oklahoma Corporation Commissioner
• Republican Todd Hiett
• Libertarian Todd Hagopian
There will be eight judges to decide to retain them with a yes or no vote. Watch for more information regarding judges in a future edition of this publication.
Depending on the address on your voter registration will determine other offices that you will be allowed to vote. If your address has changed and you have not updated your voter registration you should do so. Your current residential address not only determines some of the offices you can vote on, but also determines the precinct where you can go vote on November 3. 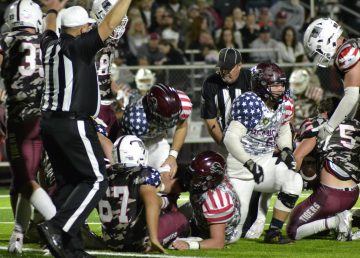 by Seth Crowder WVW Sports Blanchard defeated Tuttle 7-0 last Friday night, for the District 2 title in class 4A. The Lions finished the season undefeated in District play. Blanchard (7-2) will face Elgin (0-8) at home for the first round of the playoffs, Frid... END_OF_DOCUMENT_TOKEN_TO_BE_REPLACED